At first, it was difficult to understand the use of this indicator, even when every website and other multiple sources said that this is the greatest tool to measure volatility. But how to apply this in trading?

When trying to go long(Buy), subtract the opening price of the candlestick with the ATR value and put the Buy Limit Order.

When trying to go short(Sell), add the opening price of the candlestick with the ATR value and put the Sell Limit Order.

The Profit Target and Stop loss can use the multiplication of the ATR value, e.g: 2 times the ATR value is normally used.

I've noticed that the market normally reverse/retract when the price reaches ATR value, it just like the market was run out of steam or just resting for a bit before continuing the action or even decided to reverse. This is when I found out the importance of using ATR in my trading setup.

In my previous post, I'm using Bollinger Band and Awesome Oscillator as the entry point while it was actually working, I am having difficulties to set the TP and SL. ATR Indicator solves this problem for me plus by using ATR I was able to enter the Market at the better price.

The Principle of trading is: BUY LOW AND SELL HIGH

The principle of a good trading Setup is:

2. Where to take profit and where to cut loss.

This is GBP USD before Economic data.. this pair has been down since morning. Its actually "Buy the Rumour Sell the News" since the consensus is lower than the previous data.

here is the result of the economic data.

CPI is lower than the consesus.. GBP USD should be down !.

but I wont bet too much on this trade because later on at midnight there will be FOMC announcement from the Fed. Which will likely affecting all currency pair.

I've read many books about trading, Forex, and etc. There are no one have said they found a "Holy Grail" of Trading, a Setup that will never lose, a Method that will win 100%.  If  somehow You met someone that claim they have "Holy Grail" Method, then it is better to Ignore him and run away because the only "Holy Grail" they have is how to clear out Your pocket.

- Upper and Lower Bollinger Bands act as Support and Resistance, I use these lines as entry Point.

- Parabolic SAR is used for the confirmation

- Alligator lines (Lips, Jaw and Teeth) are used as short term target level (profit or stop loss), and as confirmation.

- Awesome Oscillator are used together with Bollinger Band for Entry.

So, I have three priority entry Condition in sequence from the most important to less are : Awesome Oscillator, Upper and Lower Bollinger Band, and Heiken Ashi.

While other Indicator act as secondary confirmation.

There are several ways to trade with the Bollinger Band :

Price breakout is usually preceded by Bollinger Squeeze, which means before any breakout can happen, prices are consolidating by moving in range. Psychologically speaking, the market at this point is undecided, most investors are wait and see. When a breaking news happen, investors are no longer wait and see, they are ready to take stance and therefore start pouring their money to the market, The result of the fight between The Bulls and The Bears will come to light.

Upside Breakout movement as shown in the chart above follows the upper Bollinger Band until it consolidates made some retracement because some people books some of the profit. After a retracement, prices continue to move higher.

Things to remember when trading Breakout:

1. Market are consolidating, there are no winner between the Bulls and the Bear. In other words market are ranging for some times,

b. Line of the upper and the lower Bollinger Band are flat or almost flat.

These are the signs that market is consolidating and ready for a Breakout.

2. Confirm with other indicators, in my trading setup, I'm using AO for Breakout confirmation.

3. Breakout trading in a smaller time frame has to be inline with the Trend on the Higher Time Frame, this will increase success rate.

4. Beware of False Breakout. False Breakout is where sudden high volatility enters the Market and then sending the price break through the Upper or Lower Bollinger Band, but different with the real breakout which price will follow through the upper and the lower band, false breakout is only temporary. After breaking out the Upper/Lower Bollinger Band it lost its momentum and start reversing in direction.

a. Candle stick or barchart have to be closed above or below the Upper/Lower Bollinger Band.

b. to Protect against sudden reversal, move stop loss at the entry price.

My rules for trading reversal using Bollinger Band is:

2. Straight line at the Upper/Lower Band are preferred when making entry.

3. the smaller the space between the candle stick and the Upper/Lower Bollinger band is better for the possibility to success.

4. Different color of Heiken Ashi Candle after the failure of break out is preferrable when making entry decision.

5. Put stop loss at the point of the Upper/Lower Bollinger Band.

6. Always confirm with another indicator. 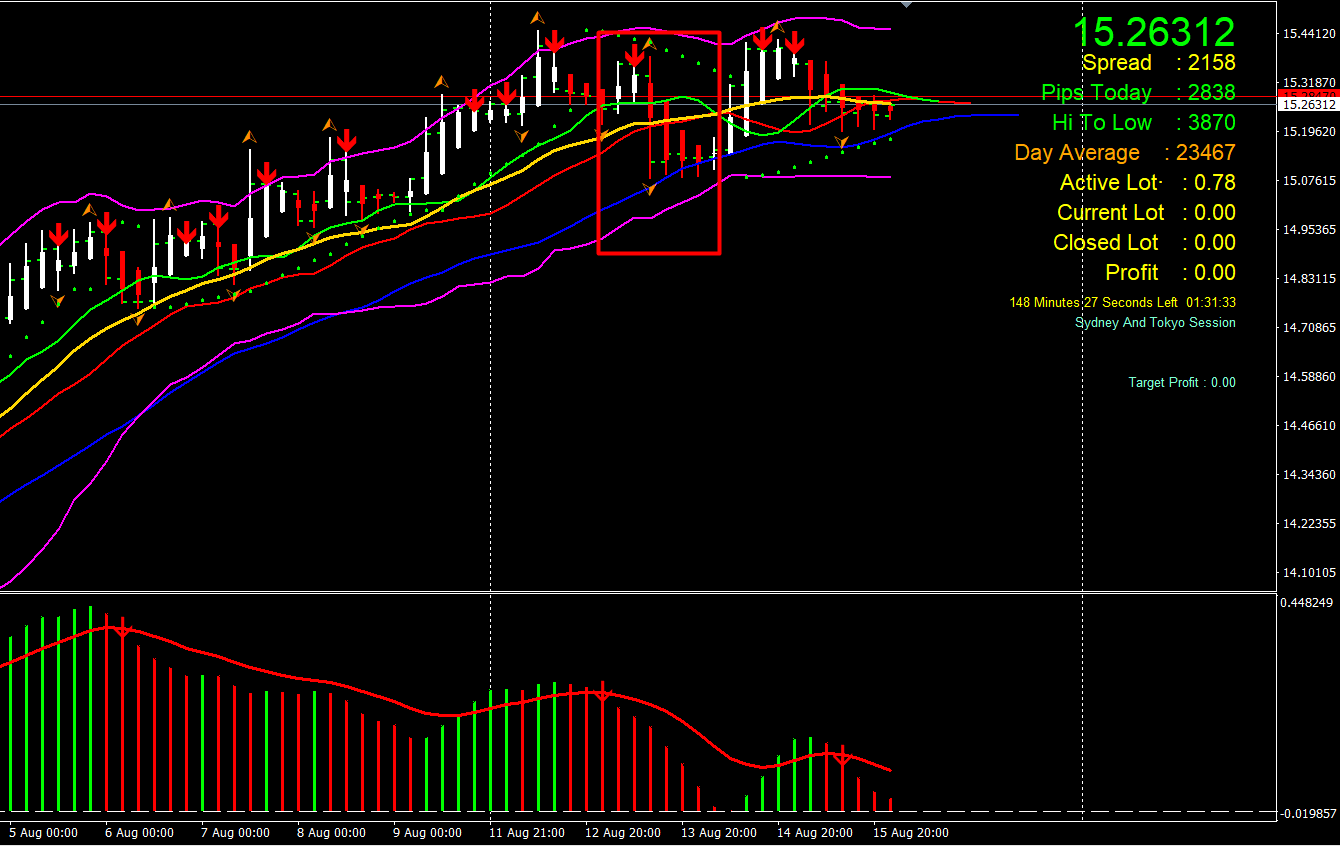 To be honest, I lost this trade.. I stop out before the price eventually goes down. Fear is one of the reason why this trade failed. Trading USD/ZAR and Trading Gold (XAU/USD) are difficult for Me because of the wide spread and fast movement. Trading USD/ZAR and Gold is like riding a fast race car, one mistake and whole account can be blown up.

There is nothing wrong with the setup, but trade have to be executed with confidence and proper money management.